Top things to do in Chicago! 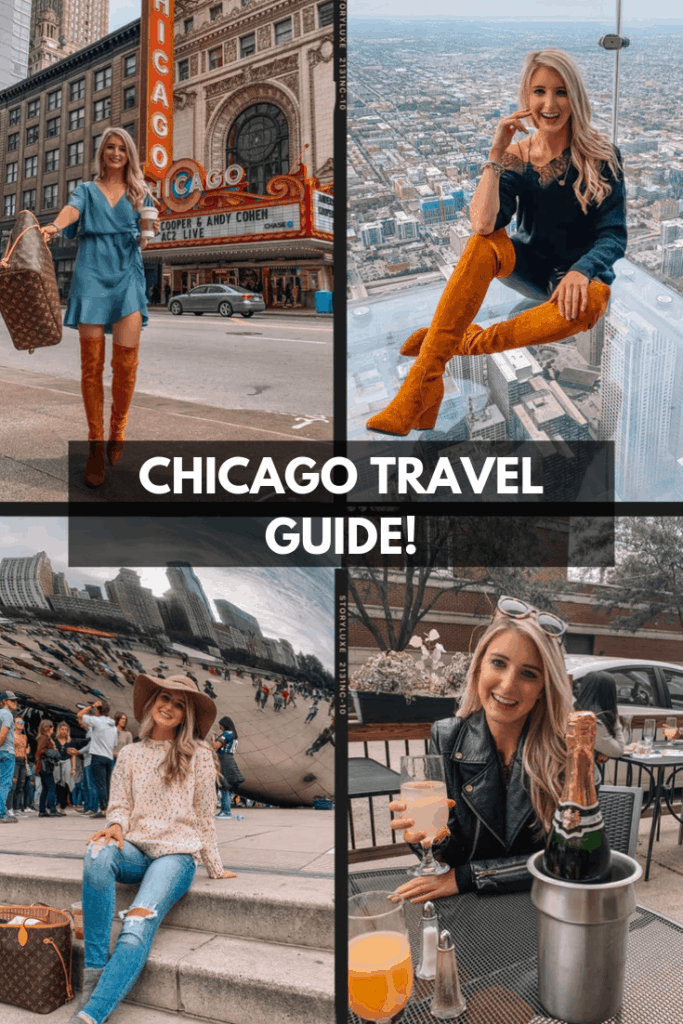 Chicago is one of my favorite cities to visit!  It’s extremely similar to Toronto which might be why I love it so much!  I recently spent three days in the city and wanted to put together a travel guide that summarizes the top things to do in Chicago!   Hopefully, this post will make it easier when you’re planning your next trip!

Wyndham Grand Chicago – This is where we stayed.  It’s an older hotel so the rooms are huge.  The design is a little dated but you cannot beat the location.  All the tourist attractions were about a 5-minute walk away – couldn’t get better than that!

Air B&B is an amazing option.  Places downtown start around $155 and go from there.  I always like to check Air B&B first before looking at hotels because sometimes you can find some great deals!

Food is always a popular subject especially when traveling!  There are some amazing places to eat in Chicago!  Overall tip – make reservations at least a month beforehand!  Many of these places fill up extremely fast, making it near impossible to get reservations.  In addition, when in Chicago I highly recommend getting deep dish pizza!  One of the girls in our group is highly lactose intolerant so we never went but I list some great spots below! 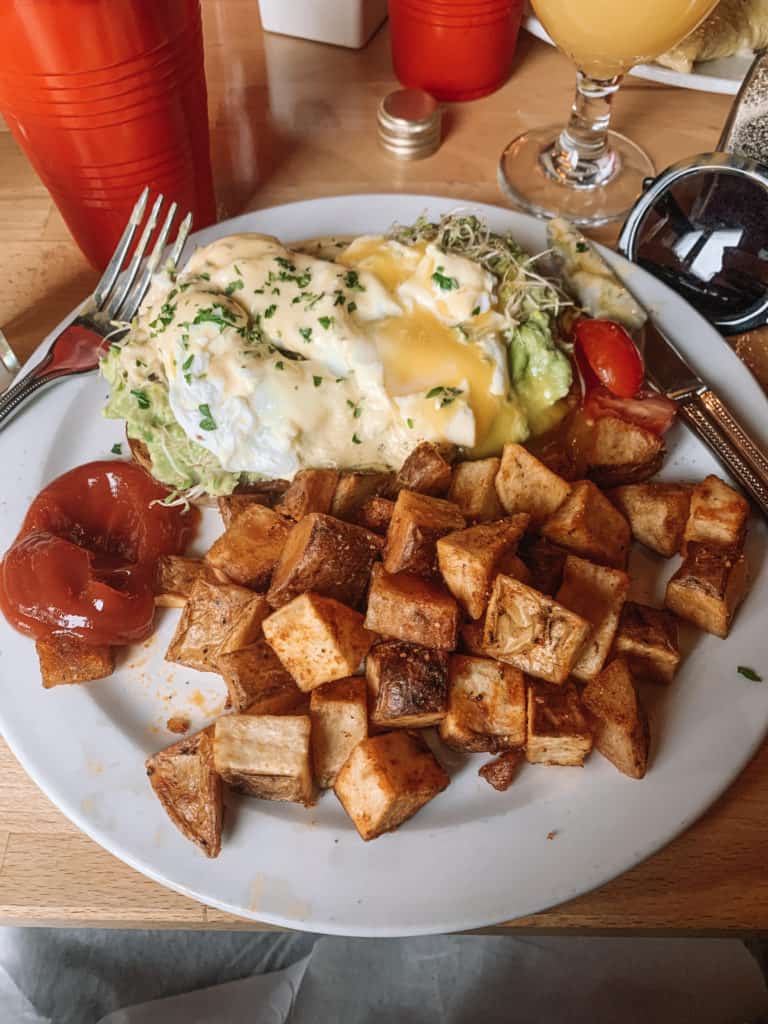 Featured above – Avocado Toast from LOKaL

Think college dive bar with amazing food and the following perks: bottomless champagne, red solo cups, hip hop, and an outdoor patio!  LOKaL is a fun restaurant located in West Dupal, it’s also the place to be if you’re looking for a boozy brunch!  My friends and I went there on Saturday and it was very BUSY (all the tables were full) I had the avocado toast (pictured above) and it was amazing.  We also ordered the unlimited champagne which was great for a girl’s trip!  Make sure you make a reservation as tables fill up fast (brunch available Friday – Sunday)! 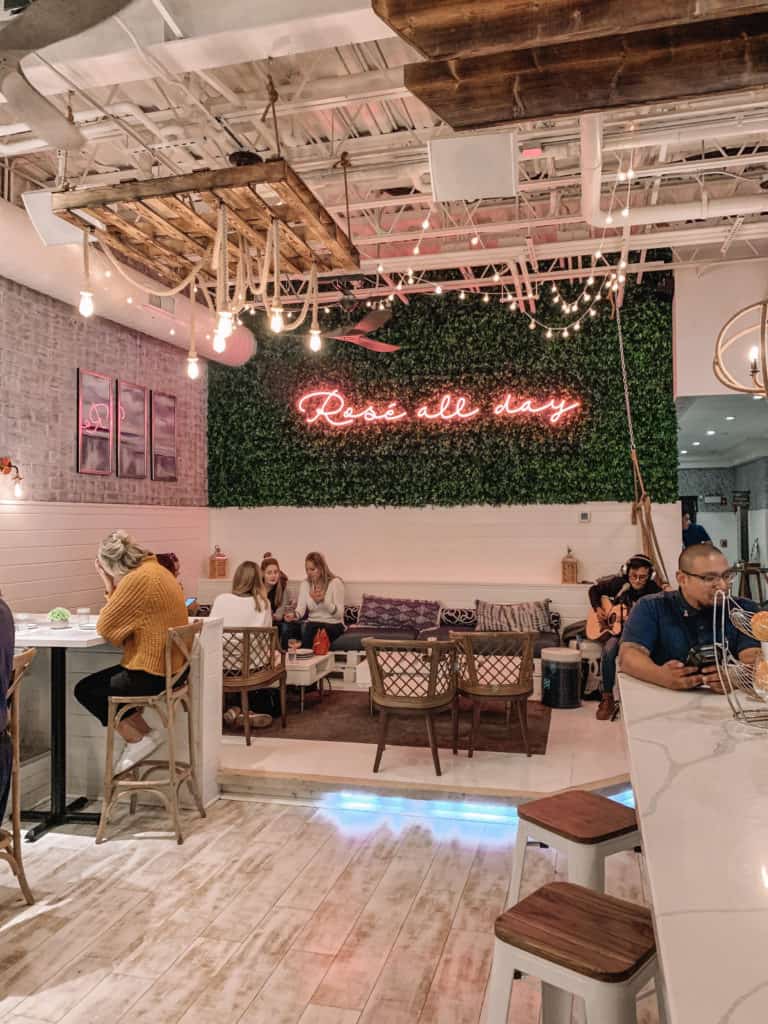 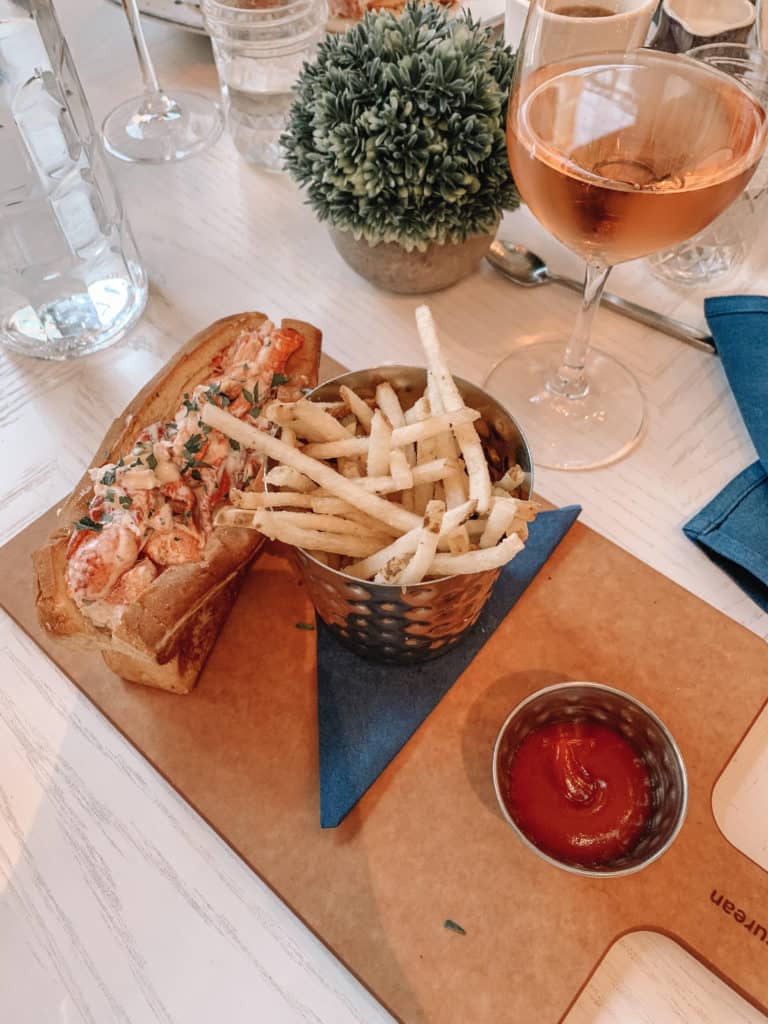 I’ve been wanting to check out Hampton Social for a long time because it’s known for its cute interior and amazing seafood!  They also have a Rose theme going on with half-price bottles on weekends.  I got the lobster roll (served cold) and it was amazing.  My friends got the eggs benedict which they said was also fantastic!

Other Notable Places to Eat brunch/lunch: 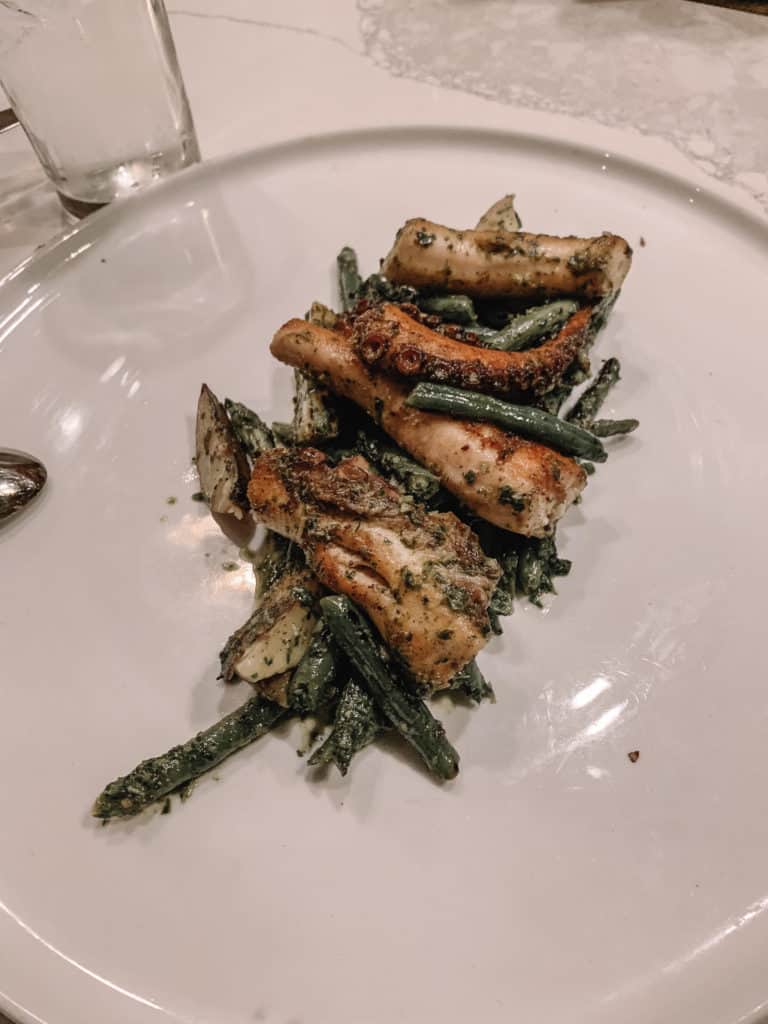 One of the best meals I’ve had in a very very long time.  Anything you order is going to be amazing.  Many of their dishes are pork-based (hence the name) however I don’t eat pork and I had no trouble ordering!  I had the Octopus and man it was good!  Tasted like butter.  If you’re making dinner plans make it a priority to go (prices are also reasonable)!

Other Notable Places to Eat Dinner: 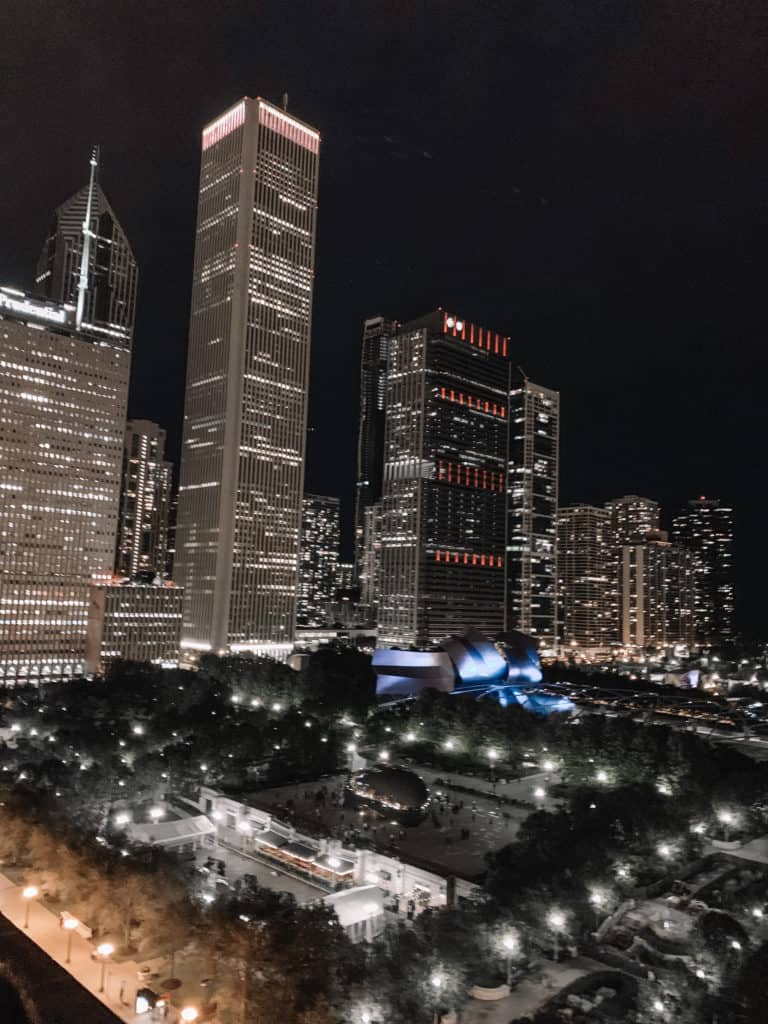 We headed to Cindy’s Rooftop Bar on the last night in the city!  It’s a great location to watch the sunset and get great views of the city including the bean and Millenial park!  Drinks are a little expensive (you’re paying for the view) but it was totally worth it being up there for a little while!

11 Things to do in Chicago

There are so many things to do and see in the Windy City!  Below is a list of top things to do in Chicago, especially if you’re only there for the weekend and have limited time. 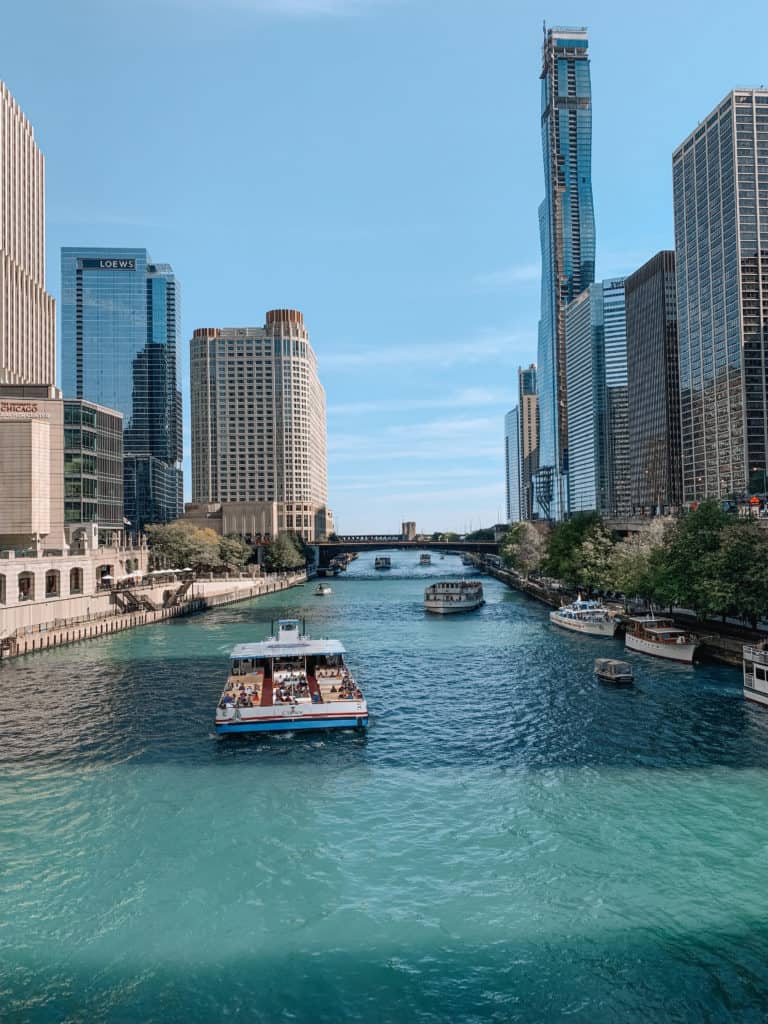 When in Chicago you need to make it a priority to go on the architectural boat tour!  To give some context, the Chicago River runs right through the city.  After Chicago burnt down in 1871 the city had to rebuild.  Over the next century, a lot of effort was placed on architecture. Given the lack of antiquity buildings due to the fire, modern architecture was the focus.  Since the river runs throughout the downtown area, many of the buildings are situated directly on the water.

The boat tours on average, last between 60 – 90 minutes,  During that time you will be given the history of Chicago and all of its buildings.  Some buildings are incredibly beautiful and imaginative.  I get it, architecture doesn’t sound that cool, but the comic relief given by the tour guides and the beauty of some of these buildings make it well worth it!

This is the tour we went on and it was great!  We had a funny tour guide, learned a lot of cool things about the city’s history and it was fairly priced! 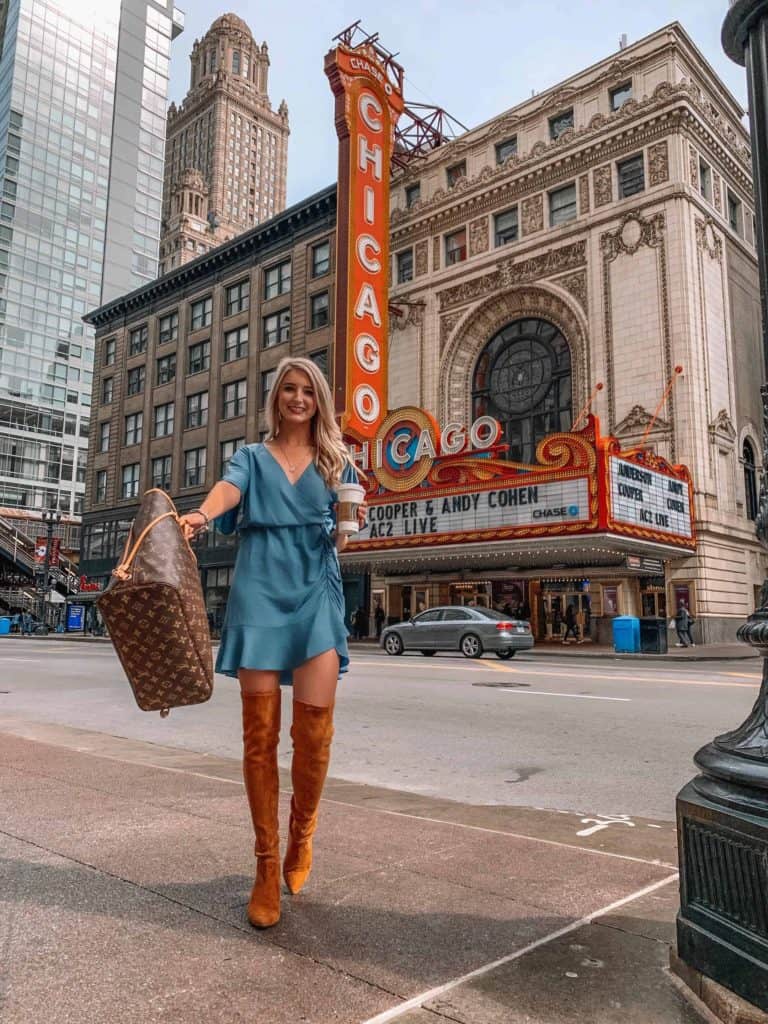 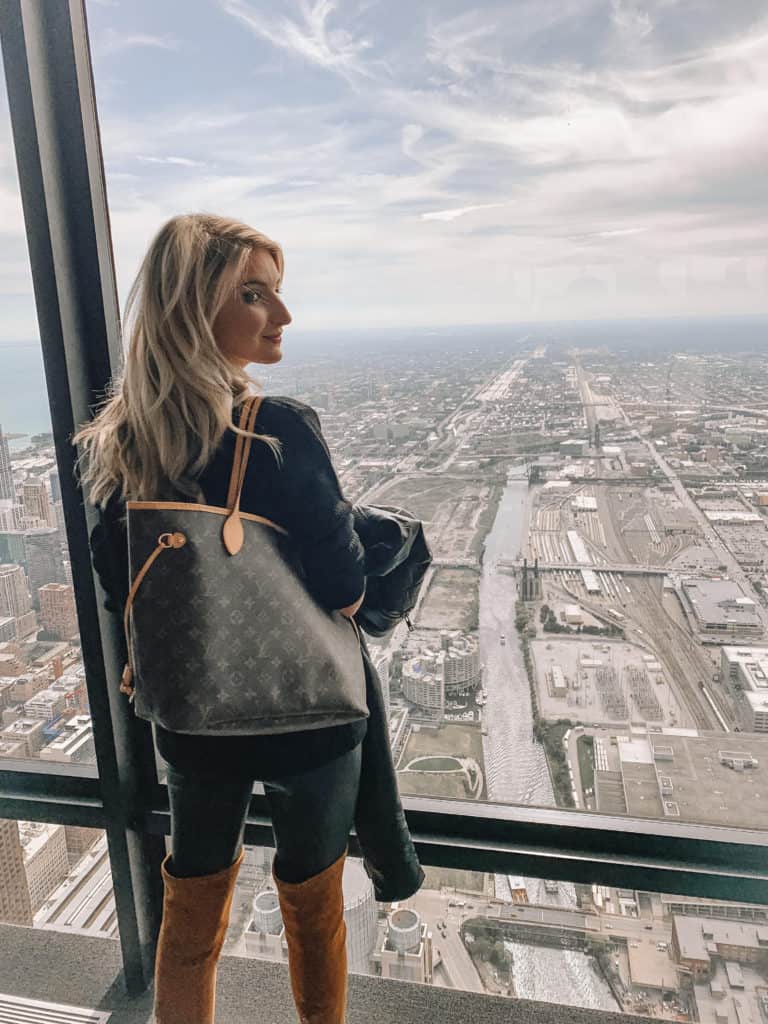 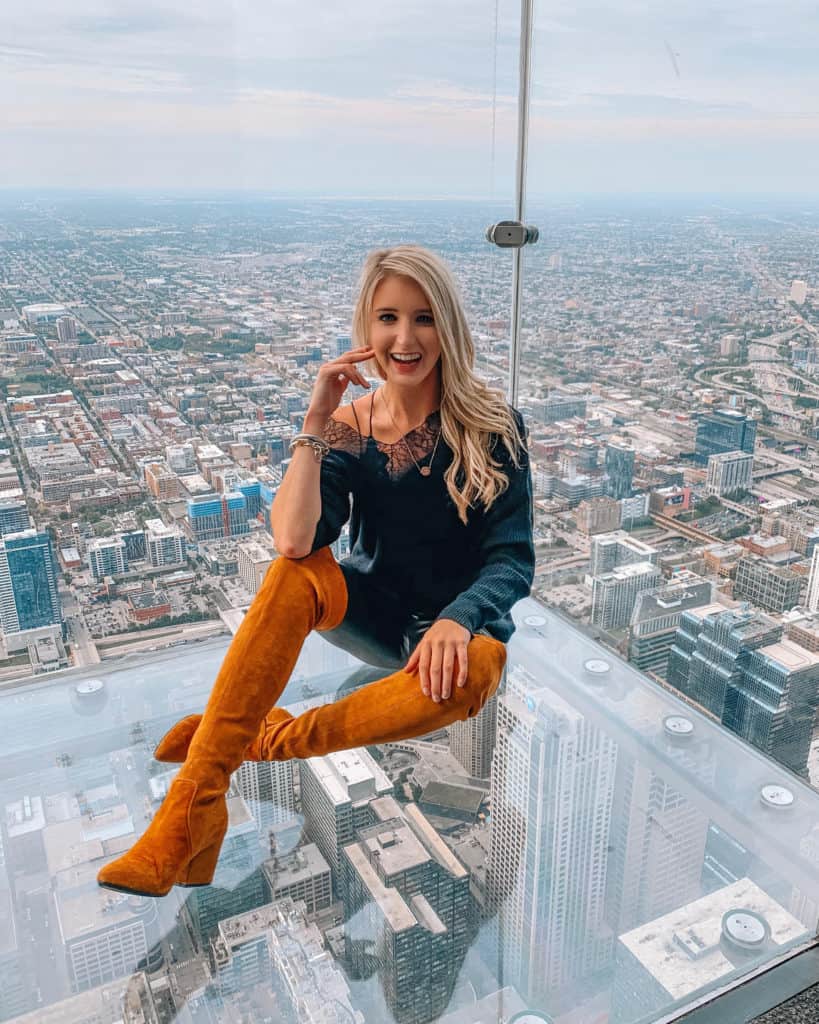 The Willis tour and Skydeck is a MUST DO while in Chicago.  It’s the best way to get amazing views of the city while conquering fears by sitting on the glass floor!

The Willis Tower, once known as the Sears Tower, was the world’s tallest building until 1996.  It got beat out by the Petronas Twin Towers in Malaysia.    The Skydeck is located on the 103 floor.  Once up there you can see 360 views of the city through all the windows.  There are also 2 glass boxes that hang outside of the tower you can go into and take photos! 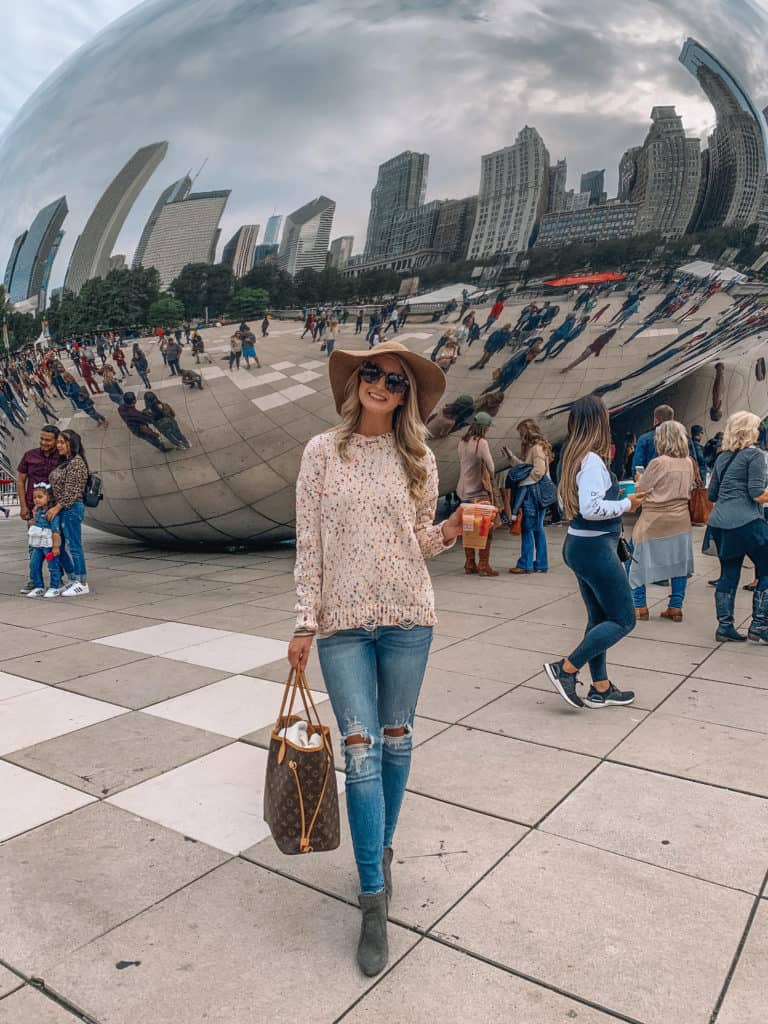 The iconic bean also known as Cloud Gate is a sculpture completely made out of stainless steel (which gives it that reflective property)!  It was unveiled in 2004 along with the park it sits in (Millenial Park).  One of the coolest parts of the bean is that you can see the reflection of the skyline in it!  Created by Anish Kappor a London based artist, the bean was highly criticized at first, however now it’s become a staple attraction in Chicago!  Even if you’re not a huge fan of the design, it’s still fun to visit!  The reflective qualities make it fun and challenging to take pictures with!

A 1000m pier located on the Chicago shoreline, Navy Pier is a fun place to visit on a sunny day!   Navy pier was built in 1916 has gone through some significant changes over the years.  It’s currently home to a Ferris wheel, tons of shops, restaurants, a merry go round and more.  It’s a fun place to walk down to.  You can also get great views of the city! 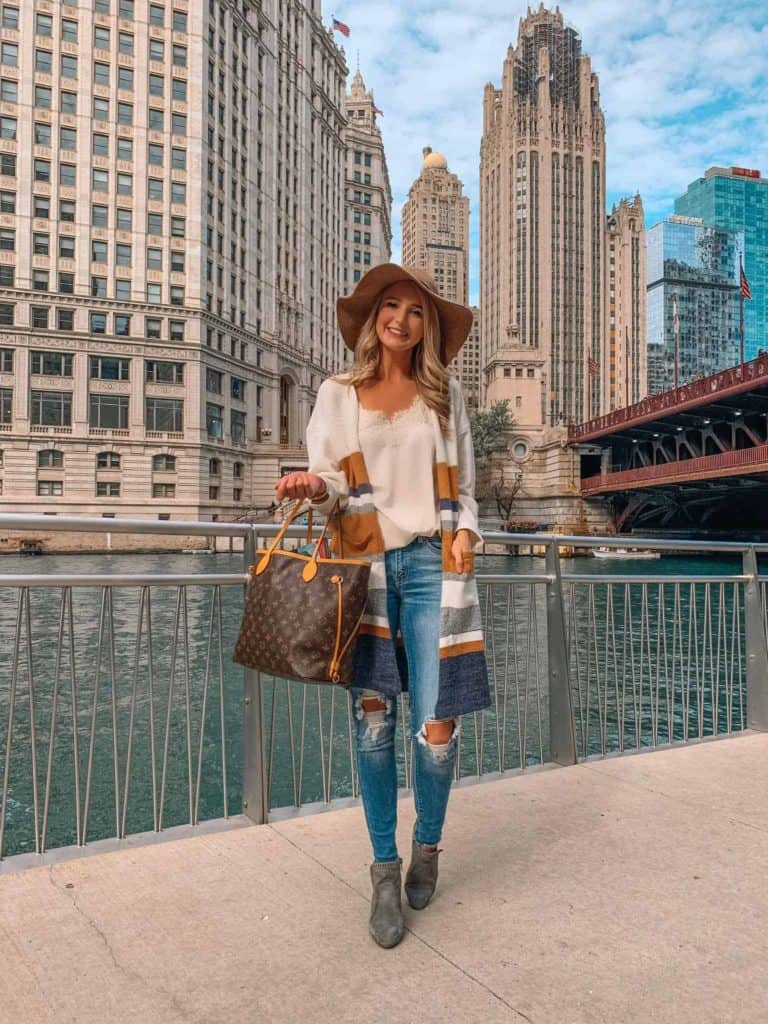 The first free thing to do on this list!  Walking along the river may not sound exciting but it’s the perfect way to see the city!  There are trails running along the majority of the river that you can walk along.  Here and there you will find nice cafes and restaurants you can stop at for a bite to eat or a glass of wine!  It’s also not overly busy.

Alright, this one is a little unconventional however parts of Chicago’s “L” train (short for elevated) run above the city.  The L consists of a variety of colored lines (e.g. red, Blue, Brown etc) that run throughout Chicago.  Some lines run directly through downtown which is a cool way to see certain parts of the city!

Bus tours are always a great way to see the city if you’re tired of walking or want to cover many things in a short period of time!

Ever want to learn about Chicago’s gangster past?  This tour is for you!  The tour is run by actors that take on gangster personas.  As the tour progresses, the actors explain what was going on in Chicago during the 20-30s (prohibition era).  You will visit some landmarks that real gangsters visited during the times.

This is a classic bus tour.  If you’re an avid travellor you probably have heard of these.  What I like best about Hop on Hop off is that they have SO MANY stops around the city.  When I was walking throughout, I think I passed at least 10 which makes seeing the city a breeze expecially if your feet are hurting or if your traveling with someone whos needs assistance walking.

9) Goose Island – For the beer lovers

Goose Island is an island in the middle of the city.  It’s not man-made, it’s been there for centuries, getting its name from all the birds that used to find refuge there.  It was turned into its own neighborhood as the city expanded.  Goose Island is easy to get to and hosts a variety of restaurants and breweries.  If you’re looking to sample some beer, this is the place to be!

Top breweries in the area:

Both are perfect for a rainy day!

The Art Institute – Holds a multitude of revolving exhibits, it’s an easy place to get lost in for an afternoon.  Tip: check the website before visiting to see if any exhibits pique your interest

Chicago Planetarium – Great place to learn more about space through their exhibits and watch some shows that take you into our galaxy!  It’s also kid-friendly.

11) The Magnificient Mile – Shop Till You Drop!

Another free thing to do while in Chicago!  This is the commercial district in Chicago where all the best shopping is.  It’s also a great city walk if you’re looking to get some steps in!  Filled with great restaurants and some tourist spots along the way.  If you’re walking along stop to look at:

That summarizes my top things to do in Chicago, hope you guys enjoyed!

Until Next Time Chicago! 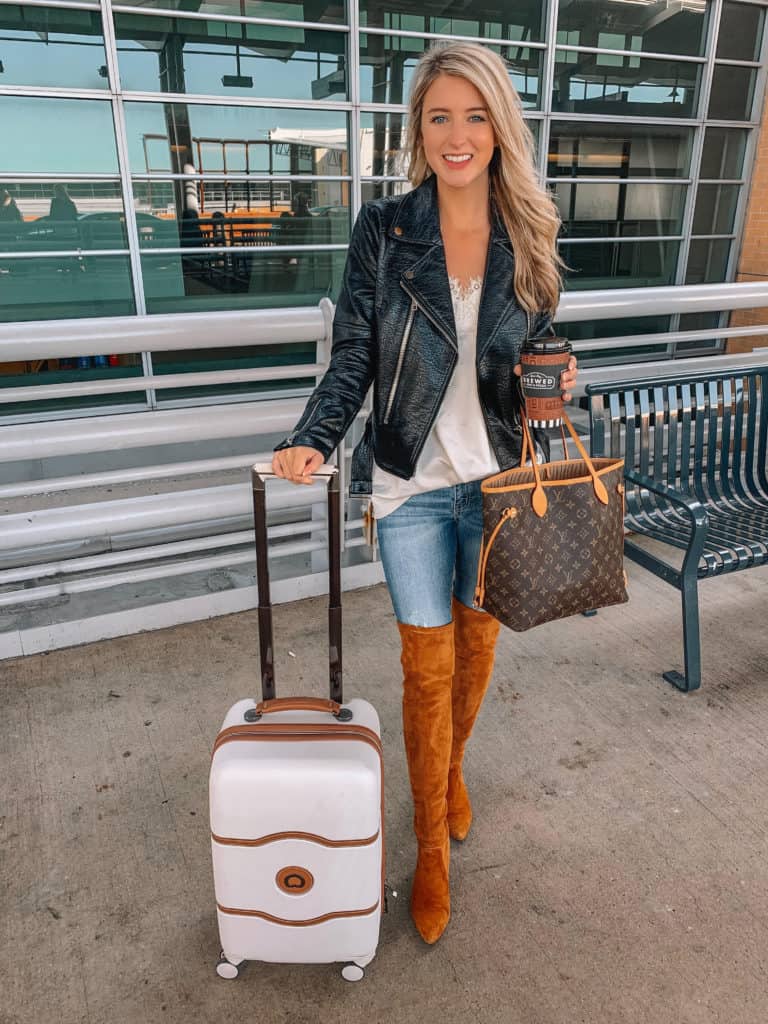 Planning a wedding? Check out my wedding blog!

Prada & Pearls is a participant in the Amazon Services LLC Associates Program, an affiliate advertising program designed to provide a means for us to earn fees by linking to Amazon.com and affiliated sites.

Share this ArticleLike this article? Email it to a friend!
Email sent!